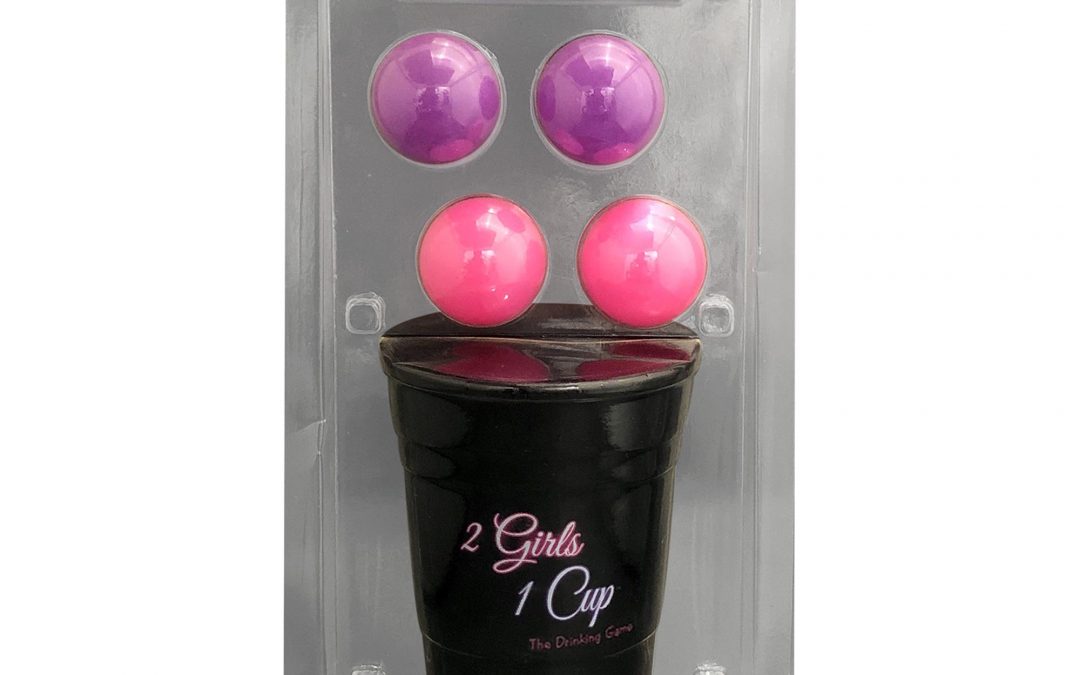 Kheper Games, Inc. is proud to release their newest party game, 2 Girls 1 Cup 2 Girls 1 Cup… is meant to give a laugh for those of you familiar with the video clips by this name. This product, however, is a game that can either be played by two people or two teams. Basically, its Beer Pong but with one cup. Each player (or team) gets two balls, and they take turns trying to land a ball into a cup. When they do, the other player takes a drink of the beverage inside. Just like regular beer pong, the rules are very simple. The rules suggest though using sparkling wine, beer, or another beverage of choice. The game is packaged to appeal to female consumers, but anyone can play. The item can be displayed in an adult games section, or with bachelorette / ladies night novelties. “Yes, we went there!” explains CEO Brian Pellham. “We’ve been asked many times over the years to do a female pong game, and when we were deciding how many cups to include, the name just popped into my head. It adds shock value to the concept and gets a good laugh too. We launched it at ANME, and it definitely received the strongest reactions from our customers. Most people knew what we were alluding to, but the couple that didn’t… well, I just told them they should brace themselves, and then look it up online.” Kheper Games, Inc. has an extensive line of party games, including: Extreme Personal Questions, Making Bad Situations Worse, The World’s Most Ridiculous Drinking Games, Drink if…, What if, Mansplain It, Dope, THC, Potheads Against Sanity, Acts of Insanity, I Hate, I Never Have…But I Will, Whose Dares Will You Do, Beer!, Deluxe Asshole, Who’s The Biggest Freak?, Who’s the Biggest Slut?, The Arts of Insanity, and the full family of What the F*ck? games. Kheper Games, Inc. launched early 14 new items at ANME, which can all now be found at www.khepergames.com For more details on the line of party and other adult games by Kheper Games, please contact info@khepergames.com or call 1-877-426-3755.